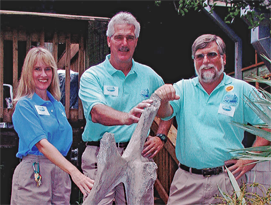 It began as a dream. A spark of environmental consciousness that spread like wildfire throughout Volusia County in the mid-1990s.

Sea turtle volunteers planted the seed when they started discussing the possibility of building an environmental education center that would care for the many sick and injured sea turtles and seabirds they found along the beach.

It would have another benefit. The center would satisfy requirements for the county’s incidental take permit and habitat conservation plan, which set specific standards and restrictions for vehicles on the beach

They found support in the Volusia County Council, with environmental advocates like Pat Northey, Frank Bruno and Big John leading the charge. The County Council gave the visionary project the green light in 1997 and assigned staff to spearhead it.

Volusia County Parks and Recreation employees John Crisp and Tim Baylie moved the project along, researching other facilities, making plans, and overseeing the design and construction of the 5,300-square-foot “Florida Cracker style” building. They also began soliciting the $2.2 million that would be needed, with $1 million each coming from the Ponce de Leon Inlet Port Authority and the Florida Inland Navigational District.

The communitywide dream came to fruition with the opening of the Marine Science Center in the shadow of the Ponce de Leon Lighthouse on June 8, 2002. During the first six months, more than 27,000 visitors toured the environmental center and staff cared for 29 sea turtles.

The Marine Science Center opened the Mary Keller Seabird Rehabilitation Sanctuary on June 19, 2004, to care for sick and injured birds. It was dedicated to Mary Keller, the area’s unofficial bird lady, who had cared for some 40,000 sick birds in her home for four decades.

As they celebrate the Marine Science Center’s 20th anniversary, employees have created a display detailing the center’s history. But they remain focused on their No. 1 responsibility: treating the turtles and seabirds that are entrusted to their care. As far as humans go, the goal is a bit different.

“We hope our visitors will leave with a better appreciation for marine life and become better stewards of the environment,” said Chad Macfie, who took over as Marine Science Center manager from Michael Brothers in 2018. “Often it’s as simple as properly disposing of fishing line and not throwing plastic bags and bottles on the beach.”

In the past 20 years, the Marine Science Center has hosted and educated more than 1.2 million visitors, while caring for more than 23,000 sea turtles and 2,000 other reptiles. The seabird rehab facility has treated more than 19,000 birds since 2004.

The Friends of the Marine Science Center is planning a campaign to raise funds that will be used to support sea turtle and seabird rehabilitation efforts.

The Marine Science Center is open to the public at 100 Lighthouse Drive, Ponce Inlet. Visitors may view the turtle hospital and explore a marine display area and gift shop from noon to 5 p.m. Sundays and 10 a.m. to 5 p.m. Tuesday through Saturday. It is closed to the public on Mondays. For more information, visit www.marinesciencecenter.com or call 386-304-5545.