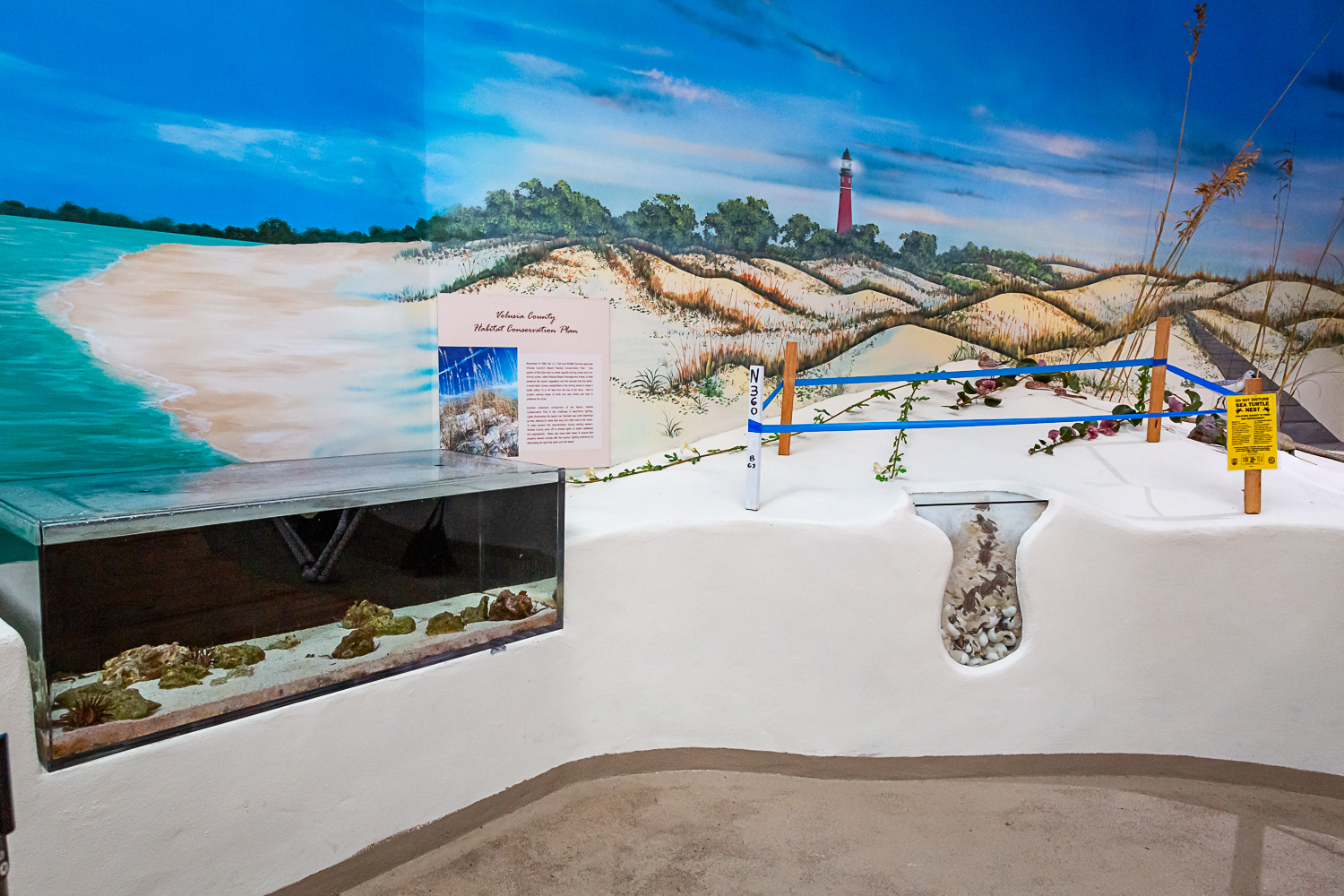 The Marine Science Center complex includes a 5,000-square-foot visitor center filled with fascinating aquariums and educational displays that highlight Volusia County’s marine environments. Take your time as you explore these interactive, immersive and hands-on exhibits and start a conversation with our knowledgeable volunteers to gain an in-depth understanding of the remarkable marine life that calls Volusia County home. 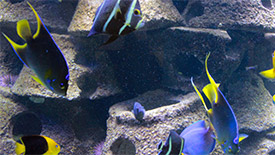 More than 60 artificial reefs have been constructed in Volusia County’s offshore waters since the program began in 1970. Vital marine habitats are created by placing the remains of ships, barges, culverts, airplanes, concrete utility poles and other large items on the seafloor. Discover why these man-made habitats are so important while meeting some live reef inhabitants up close and personal at our 5,000-gallon Artificial Reef Exhibit. Learn more about Volusia County's Artificial Coral Reef program.

Estuaries occur in areas where freshwater rivers and creeks meet the ocean, and they are one of the most productive ecosystems on earth. Volusia County spans nearly 50 miles of Florida’s East Coast and hosts an extensive variety of estuary habitat. Immerse yourself under the mangrove trees at our Estuary Exhibit while you experience firsthand how these areas shelter live fish and invertebrates, and learn why we call them “the cradle of the sea.” Learn more about Volusia County and the Estuarine Restoration Program. 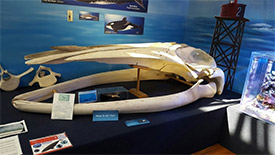 Volusia County’s Atlantic coastline offers valuable habitats for a variety of whale species. Throughout the Marine Science Center you will find genuine rib bones, jaw bones, vertebrae, and even the giant skulls from a sperm whale and humpback whale on display. See what a dolphin looks like on the inside and learn what whale bones, baleen, or a whale’s tooth feels like while visiting our Whale Exhibits.

Coral reefs are the largest structures built by any organism on Earth, and they host more forms of life than any other marine habitat. Florida and Volusia County’s living coral reefs form vital habitats for commercial fisheries, offer shoreline protection, and provide billions of dollars annually to the state’s economy. Discover why living reefs are so important and threatened as you enjoy the beauty of live corals, dozens of reef fish, and colorful invertebrates in our Living Reef Aquarium.

The Marine Science Center’s unique location is just a short walk from the world famous Ponce Inlet Jetty. This man-made rock outcropping extends from the beach nearly a half mile into the Atlantic Ocean and protects the coast while it creates a safe passage for boats traveling through the inlet. Fishermen know that jetties also create great habitat for large game fish. The Marine Science Center’s jetty aquarium is home to several species of fish and dozens of small sea creatures you may be able to feel for yourself in the attached invertebrate touch pool. 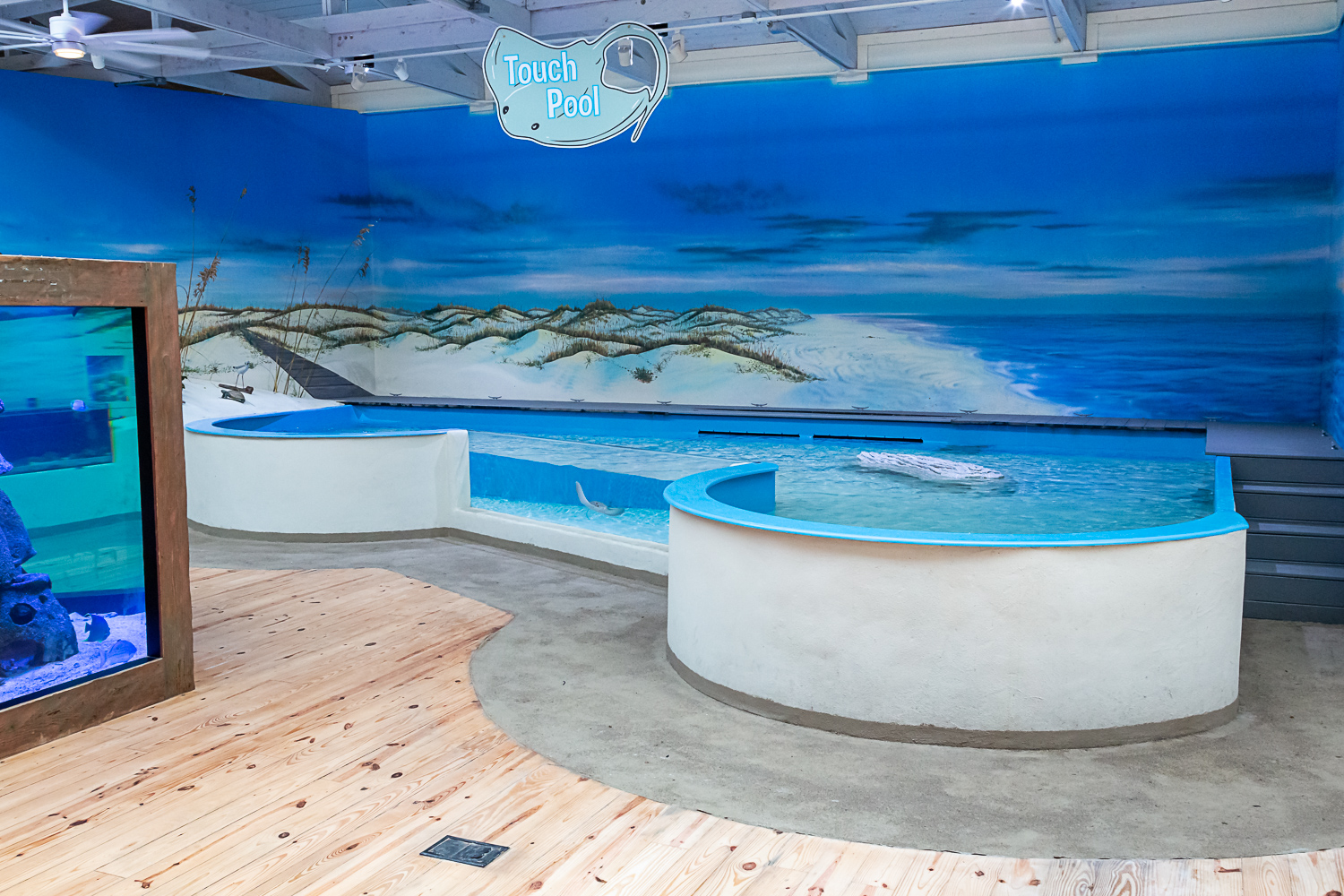 Most stingrays spend the majority of their time inactive, partially buried beneath the seafloor with only their eyes and special gill openings above the sand. In addition to their ability to hide under the sand, stingrays often have a venomous barb on their tail that can deliver a painful sting. The resident stingrays in the Marine Science center’s 13-foot-long touch pool do not have barbs, so visitors can reach in and touch them or other exciting organisms that inhabit the ocean’s sandy habitats.

Volusia County hosts a wide range of freshwater habitats. Rivers, creeks, lakes, ponds and streams dominate the landscape and are home to hundreds of unique species of fish, reptiles, water birds and invertebrates. Peer through the viewing window of the Marine Science Center’s freshwater aquarium and discover how Florida’s native turtles and fish spend their time underwater. Above the water, you will get an up close and personal view of how our freshwater turtles love to spend the day stretched out in the sun.

As you pass from the Marine Science Center’s main exhibit hall toward the covered Turtle Terrace, you will encounter a collection of exhibits that house unusual sea creatures found within Florida’s marine habitats. Seahorses and the invasive lionfish are just a few of the interesting animals you can find in these aquariums.