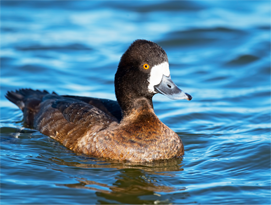 After receiving three waterbirds that tested positive for avian influenza last week, the Marine Science Center has closed avian areas to the public and halted the admission of sick and injured birds until further notice.

The three birds – two royal terns and one lesser scaup – were euthanized. Samples have been sent to Tallahassee, where technicians will determine the viral strain.

The avian flu, a highly contagious and often deadly viral infection that occurs naturally in birds, has also been identified in birds in Brevard, Indian River and Palm Beach counties. Since the beginning of February, the virus has also been reported in parts of Indiana, South Carolina, North Carolina, Virginia and Kentucky. It has been documented in Europe since early 2021.

“This was a difficult decision, but we had to take these steps to protect our current resident and patient birds,” said Chad Macfie, manager of the Marine Science Center. “We’re also ramping up our cleaning and safety protocols to help prevent the introduction of the virus into our facility.”

The Marine Science Center cares for sick and injured birds and provides a permanent residence for birds that cannot be released. The center currently houses 18 permanent residents and 18 birds that are undergoing treatment and rehabilitation. All of them have been tested for avian flu.

Additionally, Volusia County Mosquito Control is closely monitoring its sentinel chickens, which are placed in 12 locations throughout the county to help detect the presence of mosquito-borne illnesses.

Wild birds can carry the virus but may not always get sick from it. Vultures are of particular concern because they can pick up the virus while feeding on carcasses. Domesticated birds such as chickens, ducks and turkeys seem to have less ability to fight off the disease and can become infected, often fatally.

There is a low risk of transmission to humans and, to date, there have been no known human infections in North America.

The Florida Fish and Wildlife Conservation Commission (FWC) is monitoring for the avian flu in birds found sick or dead of unknown causes. To prevent the spread of avian flu, the FWC advises that the public should avoid handling sick or dead wildlife, prohibit the contact of domestic birds with wild birds, and report wild bird mortalities at https://app.myfwc.com/FWRI/AvianMortality/ so the FWC can investigate the deaths.